Good morning ladies and gentlemen! How did your weekend go?? Mine went incredibly well and you are about to see why is that.

We had such an awesome and gastronomic Sunday. We started off the day (late start, yes) meeting for lunch at Palacio de Cibeles Restaurant, which couldn’t have a better location: right in the centre of Madrid opposite to Cibeles fountain. This historic and quaint building used to be the main post office and now it belongs to the Town Hall of Madrid.

But instead of letters, they have something so much better now: FOOD! This building holds an amazing restaurant and one of its floors has also breathtaking views, you’ll see!

We had lunch at the second floor restaurant because they have a fair-priced menu for only 15 euros which is prepared by their chefs with so much love. Look!

I have to confess I think this is not usually included in the 15 euros menu but I thought I would show you guys this original starter anyway.

This cheese owns its color to the red wine is made with. However, you can barely taste the red wine, which is great in my opinion because I wouldn’t have liked it otherwise. Just perfect!

You guys know I loooove love love quinoa right?? So imagined how happy I was when I heard that they had a quinoa dish included in the menu! I didn’t even think about it for more than one second! “Quinoa it is” I said!!

And I’m so glad I did! The quinoa was perfectly cooked; right on point. On top of that, the veggies were all of an amazing quality. They were raw, which is the same as saying crudités (yes, crudités is the fancy word) and it was just the crunchiness this dish needed.

María didn’t feel like having quinoa that day so she went for the blue cheese salad. Of course, I did take a bite of it so that I could tell you guys my opinion and I have to admit it was a wise decision Maria took because it was sooo creamy and tasteful. I love strong cheese and that was just it! And so fresh! Just perfectly suitable for these hot days in Madrid. Ordering something warm would be just crazy!

This was by far my favorite dish from all the menu even though it was not after we finished that I found out it was breaded with crushed nachos. What a great idea, isn’t it??

It was not until we were done that I also learnt that the bbq sauce was hand-made in the restaurant and that it actually takes a long time to get it ready. This fact did not surprise me at all given it tasted amazing and you could tell the products used in the sauce had to be fresh because it was delicious.

About the pinky side, you might have guessed what it is by now. It is mushroom with wheat and beetroot. Of course! It had to be beetroot! What else could give it such an intense color? I think it’s a genius idea that makes the plate funny and better-looking so, well done again!

Once again, Maria did not go with the flow and she chose differently hehe. I cannot understand why because the chicken was awesome but she preferred this rice with veggies you can see down below.

I’m not saying it was not a good dish. Obviously it was great and very creamy and juicy. I actually liked it too but it was not as good as the chicken. Although I have to say it was hard reaching the level again. It was a nice second course though.

This great and massive plate of cakes was not again included in the regular menu just like you see in the picture. I believe you could choose one piece of cake, fruit, coffee…However, we were spoiled like little girls with all this sweet deliciousness.

It’s hard to choose only one but I will dare to say the mango ice-cream (in the middle) was probably my favorite. It was soft and fresh and very fruity. I’m sure it was made with real mangos because of its genuine flavor. Impressive!!

If three different cakes didn’t feel like quite enough, the chef also brought us these cute little glasses of nougat mousse. It tasted like Christmas!! How confusing in these hot summer days in the city!

I’m not very into Nougat, I don’t even eat much of it during Christmas, so my expectations were pretty low when it comes to this dessert. However, against all the odds, I absolutely loved it! Its consistency was just perfect and the almond (nougat is made out of almonds and sugar) flavor was just so authentic that I think from now on I will ask for one of those on my Christmas table. So I’ll have to look for the recipe or something. 🙂

After that much food, our body was craving for coffee and what place could be better to enjoy an after-lunch coffee than the sixth floor of the Palacio de Cibeles restaurant. Look at this views! Aren’t they spectacular? 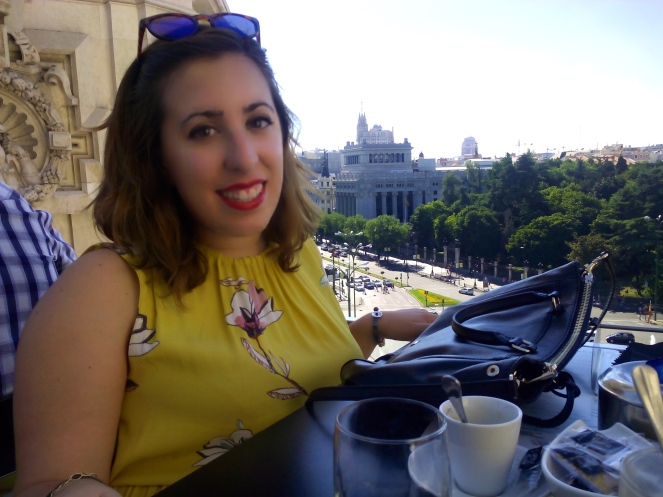 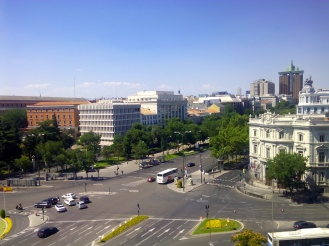 It’s a shame it was too hot to stay there for a long time because otherwise I would have spent the afternoon just taking advantage of the unsurpassable location of this place. And just imagine this views at night!! Even better! So we’ll be back!! hehe

Wooow! That was a long post! But I hope it was not boring to read guys and that you consider passing by and grab a bite at this wonderful restaurant. Just say you read it on the blog!! hehe