Triciclo is a modern restaurant run by Javier Goya, Javier Mayor y David Alfonso, three chefs who decided three years ago that wanted to open “the restaurant they’d love to go to”. Located in Barrio de las letras in Madrid, more exactly in Santa María Street, is definitely one of the best restaurants I have ever been to so I’d say their mission has been accomplished.

After this brief introduction, I think we should start talking about the real issue here: the food. Although it’s not only “food” what you’ll find in Triciclo, it’s the result of a creative process and years of experience.

“On the house” starters

Lactonnaise with a rice crackers

I’m not quite sure if “lactonnaise” is the right word for this sauce but I’ll explain why, don’t worry. The funny thing about this sauce is that it’s kind of a mayonnaise but instead eggs, milk is used to create its characteristic emulsion. If we look at it from the biochemestry side, what’s happening is that milk’s protein “casein” is creating the emulsion instead of egg’s protein “albumina”. Advanced cuisine right? And it’s only a starter.

And what about the crackers? It looks simple right? Well, it’s not. To obtain this rice kind of crisp they cook the rice, dry it, smash it until they get a dough and lastly they dehydrate it in order to turn it crispy.

Such a long cooking process to catch our attention from the start, or at least they managed to get mine because after this I was absolutely thrilled for what’s coming next. Are you?

I’m not complaining though. I mean, come on! It was free! It’s good enough that we got to try this out. If I am to say what the secret of this creamy deliciousness was, I’d dare to say it’s the cured and intense-flavored cheese used to make this cream. Just the way I like it!

Everything is pretty straightforward when it comes to the name of dish except for the “Txangurro”, or at least I had never this word before. After a bit of research I found out that Txangurro is the name that the Spider Crab gets in some Northern places of Spain. Which means that basically this is a ravioli filled with spider crab.

Now that I think about it, I believe “basically” was not the wiser choice of words because this dish is not even close to basic. On the contrary, it’s preparation finishes in front of you because the tomato water, olive oil and orange grated grin are added in situ; right before you are about to devour it haha. So cool right?

I must say this ravioli was not able to keep up with the previous dishes; personally I found it a little bit tasteless. I like stronger flavors but it is a fresh dish quite suitable for the summer though.

From the North of Spain to Italy, that’s where this piece of art will take you. And yes, I’m gonna call it a piece of art. Not only because it looks beautiful but also because its mixture of ingredients is so so smart in my opinion, the same as when an artist is mixing colors or textures. Amazing!

Unlike the ravioli I mentioned previously, this dish was full of flavor. Just imagine the red pesto, all together with the burrata, which is an Italian cheese made with mozzarella and cream, and the cecina. I couldn’t think of anything better than this. Also because I’m absolutely in love with focaccia bread. Best things about Italy in my opinion!

It seems this Trycicle only moves forward and upwards because if the focaccia was outstanding, this rosejat was just unbeatable. Seriously, even the waiter congratulate us for our wise choice haha. And god! He was right!

Many of you proabably don’t know what Rosejat is. I did not know it either. But don’t wory because I looked it up for you. Rosejat is a cooking technique that consists in sautéing the rice until it turns transparent before boiling it in order to get a much more tasteful rice. And trust me, it is an exceptional technique because this black rice could not be yummier! Best thing I’ve had in a very long long time!

We go on travelling, and this time to India. What a great journey! Two of my favourite things thanks to this dish. Travelling and curry; I couldn’t aske for more.

If you are not very into spicy food, this might not be your plate. However, I’m not a hot food lover, specially when it’s very very hot, and I did like this curry lamb meatballs. Well, actually I did not like i them; I loved them! haha.

Best way to eat this dish is mixing it all together in the same spoonfull. That’s because yoghurt and curry go perfectly together and also match the lamb and bulgur in the same perfect way. Do it as you are said and you’ll be delighted. You can trust me on this one!

You did not think I was gonna end this meal without a dessert, did you?! haha. If you did you were very wrong because we did not order one but two sweet treats. We just could not make up our minds!

Brioche bread was something unknown to me, and what a pity! I wish I had known about it before bacause it something not to be missed! On top of that, I bet this Brioche was better than most of others brioche breads you can find around so…Well done Sara!

The funny thing about it was that the brioche was warm so you had to be fast if you did not want the ice-cream to melt haha. In fact, it was delicious anyway but it was a good excuse haha.

I had never had fried milk ever in my life either. I had heard of it but I never thought it was something for me. However, I decided it was time to give it a chance and thank god I did! Such a good idea! And even better with the strawberry ice-cream!

I never expected strawberry ice-cream to actually match that well anything previously fried but first impressions are deceptive sometimes haha.

I must say it was not a regular strawberry ice-cream. Just by its intense pink color you can tell it was made with fresh strawberries. Hence, it was 100% natural. 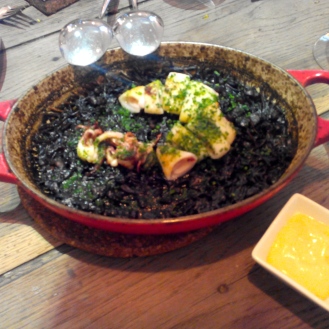 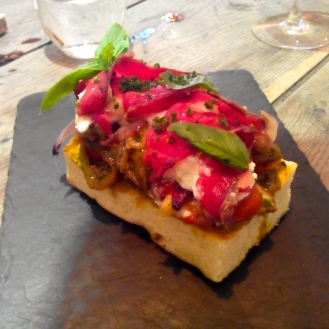 Well, I think that was enough, wasn’t it? A lot of courses, each one better then the next the last. The service was spotless, the creativity showed by the chefs was remarkable and the experience itself was one-of-a-kind. I can’t wait to be back at Triciclo!

I hope you guys enjoyed this post and see you in the next one!! Thanks a lot!